FacebookTwitterPinterestInstagram
UN Arms Trade Treaty Will Not Be Funded in US 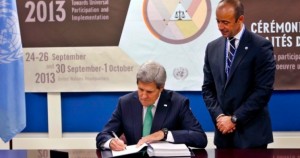 Secretary of State John Kerry signs Arms Trade Treaty in an attempt to do an end run around the constitution.

The Arms Trade Treaty (ATT) is a multilateral treaty that seeks to regulate the international trade in small arms and weapons. The U.N. Resolution 2117 lists 21 points dealing with firearms control, but perhaps of most interest is point number 11: “Calls for member states to support weapons collection, disarmament.” Basically this resolution is an end run around the constitution.

The U.N. Small Arms Treaty, which was signed by the Obama Administration, would have effectively placed a global ban on the import and export of small firearms. The ban would have affected all private gun owners in the U.S. and had language that would have implemented an international gun registry on all private guns and ammo.

Astonishingly, 46 out of our 100 United States Senators were willing to give away our Constitutional rights to a foreign power.

In Colorado, both senators Udall and Bennett voted to give your gun rights to the United Nations. Colorado voters, please take note of this as these legis-traitors run for office in the future.

Here is the complete list of senators who voted to take away your constitutional rights: