It's not just a Sporting Clays Course

Longmeadow is quickly becoming one of Colorado’s top sporting clays clubs with two sporting clay shooting courses, a super sporting course, 5 Stand, and practice trap. Each year we add something new to our already stunning course but that is only part of what makes our club so special. What really sets us apart are our magnificent facilities and services. No other Colorado clay shooting club comes with a 12,000sf Lodge & Event Center complete with overnight accommodations, RV & dry camping, ballroom, two full bars, conference rooms, lounge, game room, catering/event services and a wide range of hunting.

These amenities are what make Longmeadow the perfect location for your next corporate clay shooting event in Colorado. We are a one-stop-shop for everything you need to host the ultimate sporting clays event. Why do it the hard way when we can make it easy.

CALL US
EMAIL US 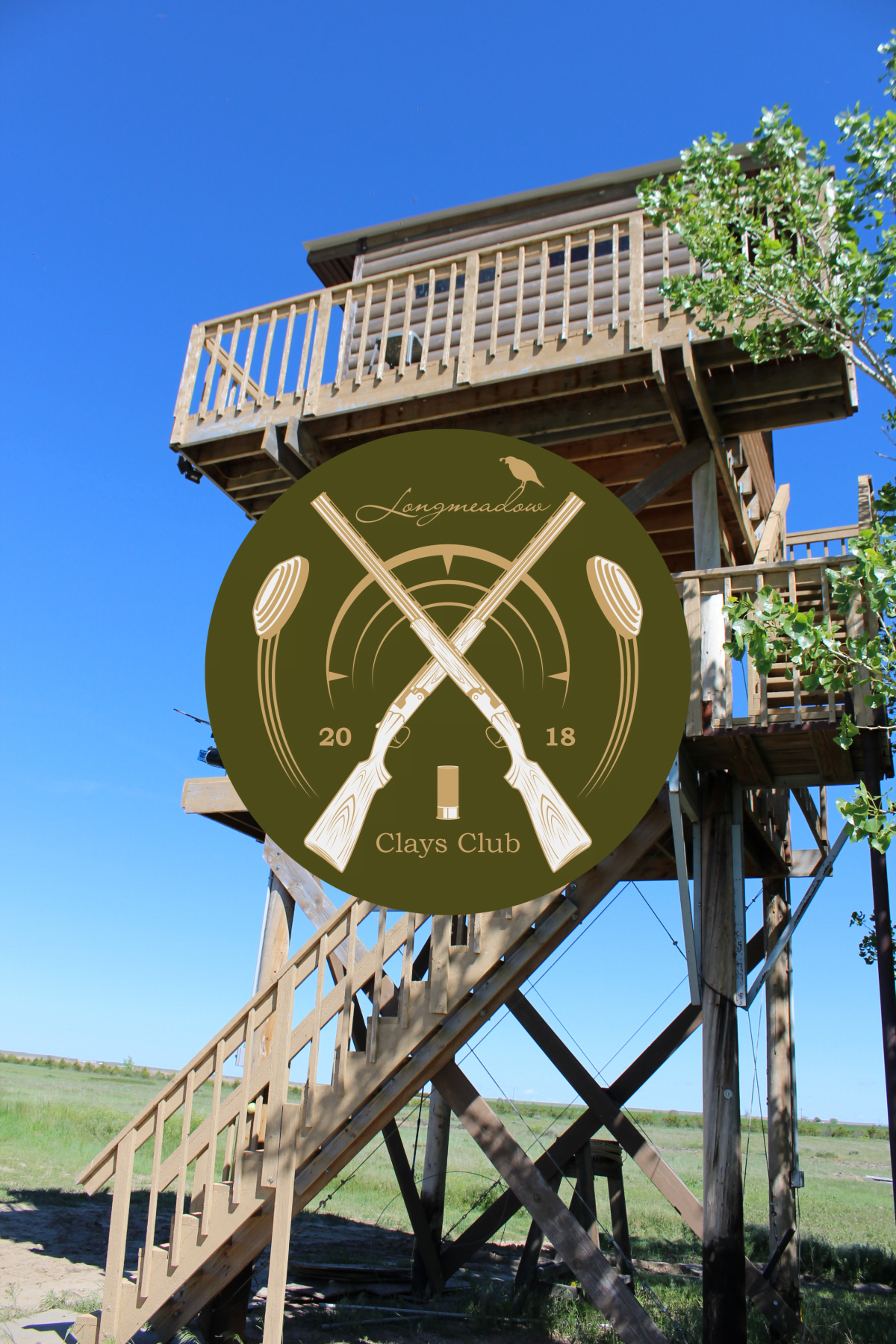 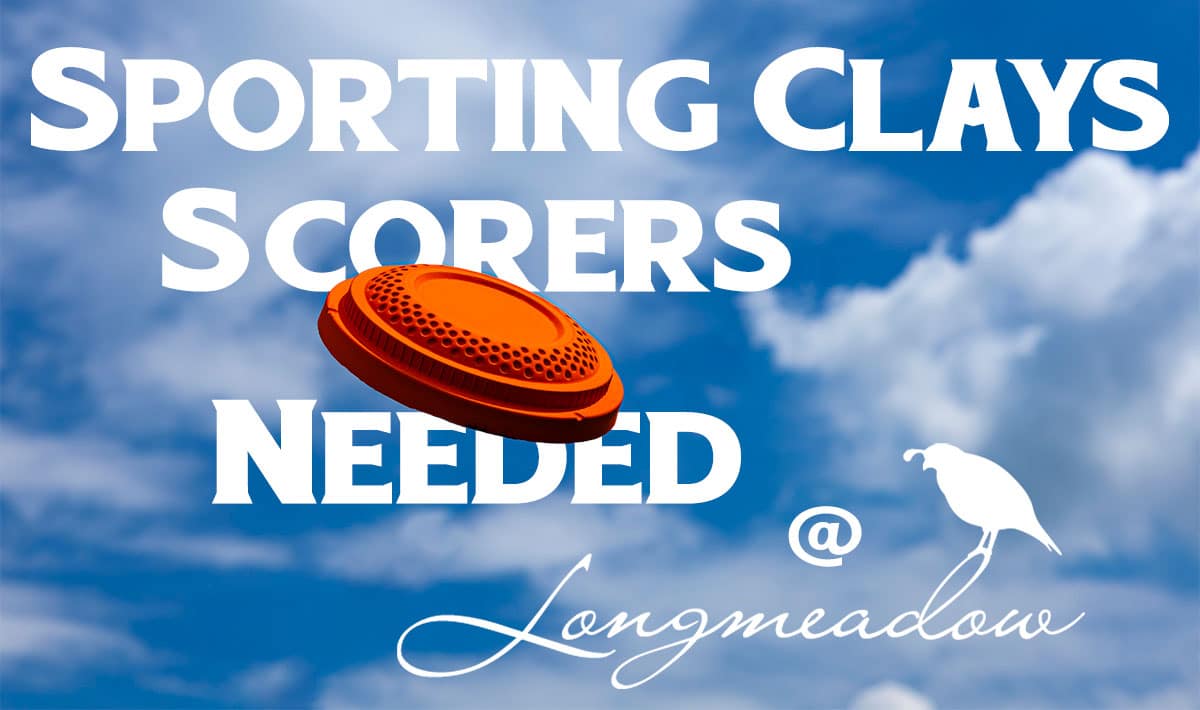 Longmeadow is putting together a Sporting Clays Scoring Team and we are looking for experienced shooting sports enthusiast interested in having some fun, earning some extra money and/or trading their time for targets. Contact us today to apply!

Sporting Clays is a form of clay pigeon shooting that can be described as “golf with a shotgun”. A typical course includes 10 to 15 different shooting stations laid out over natural terrain. Ranges are usually no smaller than 35 acres for safety reasons. This shooting sport is distinct from other games such as skeet and trap shooting due to the fact that it simulates the thrill of real hunting by offering a wide variety of trajectories, angles, speeds, elevations, distances, and target sizes. Longmeadow’s state-of-the-art sporting clays courses are among Colorado’s top destinations perfect for participating in this thrilling pastime!

Want to shoot the course or host a sporting clays event?

The Best Prices Around

Find scores, results, and awards from past shoots!

Results From Past Events

Check out a full list of all our upcoming shoots!

Become a Clays Club Member and shoot the course regularly!

Register for a Clays Club Membership

What are you waiting for? Don't miss out on these amazing deals!

The 12 station course called Antelope, and designed with solo delay for both
sporting and super sporting 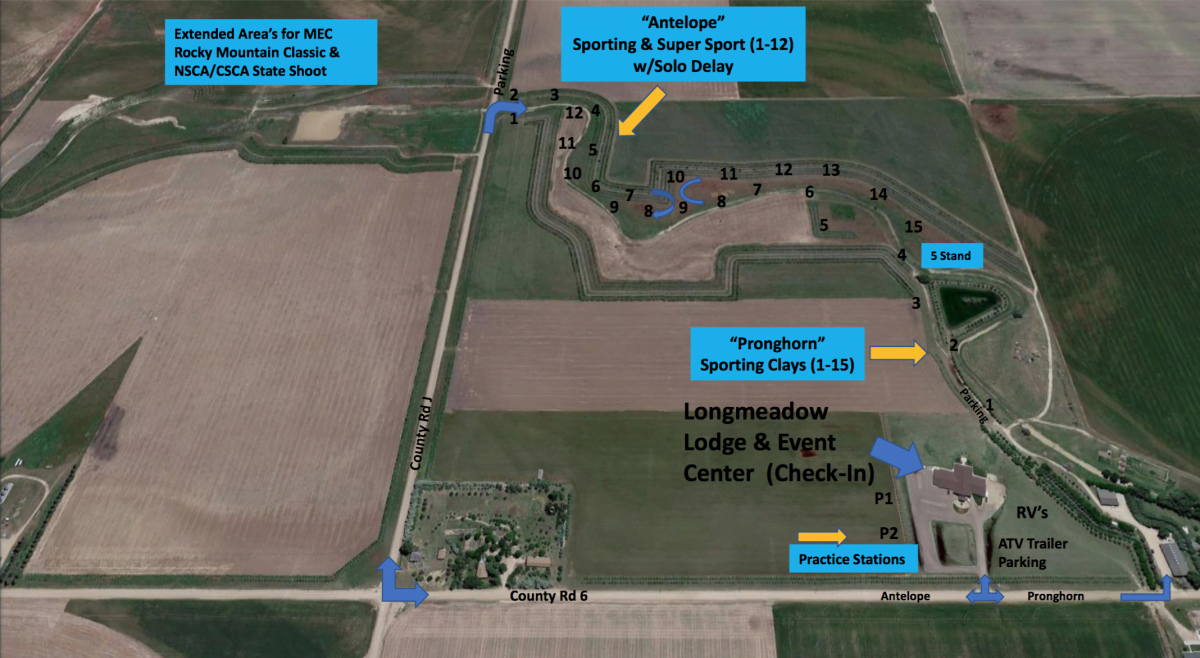 Located an easy one-hour drive east of Denver, Boulder & Fort Collins, Colorado off of I- 76/HWY 34 and HWY 52. Longmeadow year-round sporting clays action on one of the newest, most exciting country clay shooting courses in all of Colorado. Our courses layout along an absolutely beautiful stretch of the Antelope Creek which is why the courses are appropriately named Pronghorn and Antelope. Both of which are easily traversed by foot, ATV or golf cart.

We have two fully automated courses that feature a total of 27 stations of both sporting clays and super sport complete with a 30’ tower as well as raised, sunken and ground level shooting platforms. This allows maximum flexibility in target presentations and simulation of the most realistic targets possible. Furthermore, our automated system allows you to enjoy the course as a single shooter with the solo delay option.

Break Some Clays the Longmeadow Way! 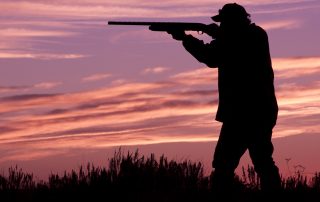 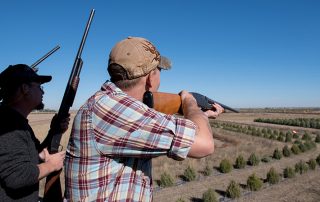 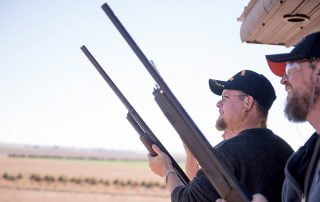 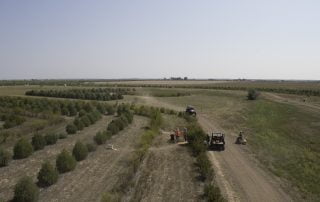 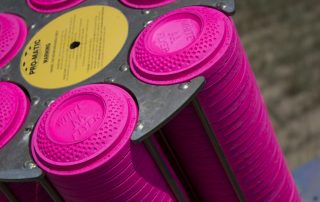 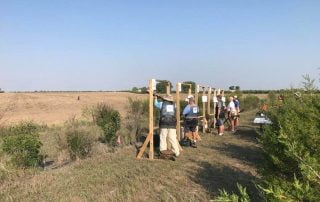 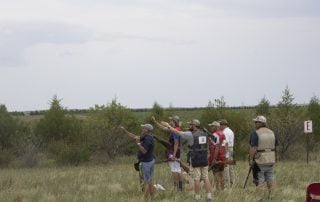 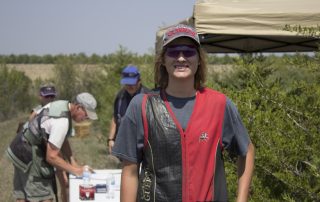 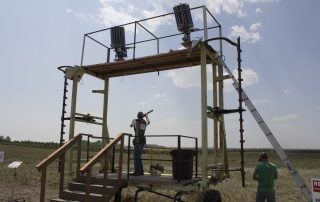 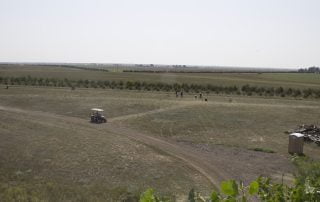 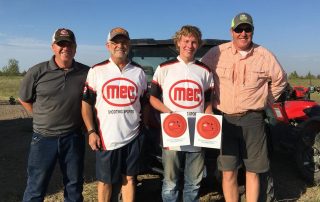 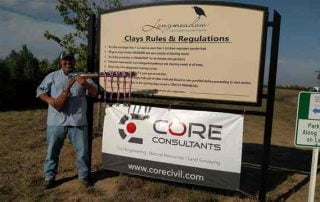 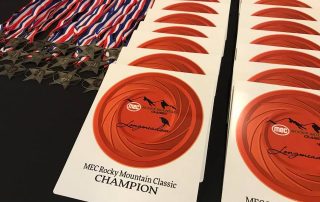 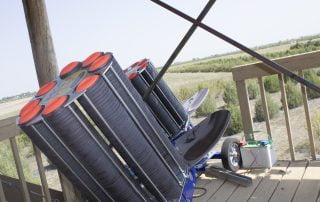 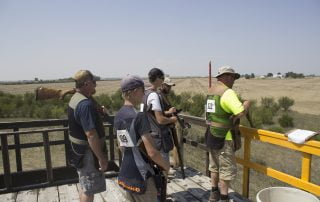 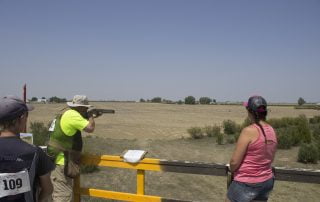 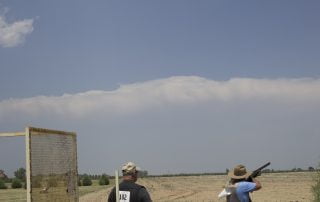 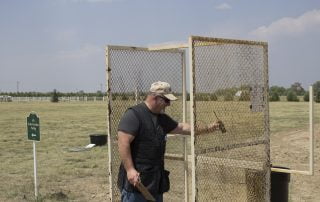 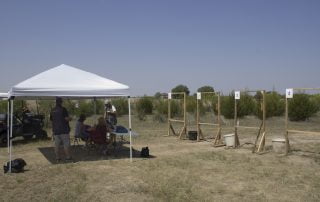 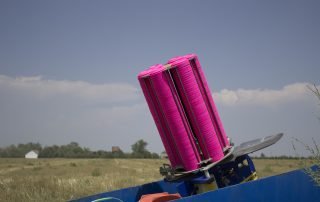 The History of Sporting Clays

Clay shooting can trace its roots back to the early 1900’s when several British shooting schools started using gold targets to practice for upcoming hunts. Before long clay was adopted for the targets instead of gold, and clay pigeon shooting quickly attracted a large following. In 1925 the first British Open was held in England, and the sport has been steadily gaining popularity since. However, Americans wouldn’t get their first taste of sporting clays until 1980 when Author Bob Brister wrote an article about it in Field & Stream Magazine.

Later that year, Remington’s Lordship Gun Club in Connecticut held the first American sporting clays competition. Five years later, in 1985, the United States Sporting Clays Association or USSCA was formed in Houston, Texas. Throughout the 1980’s the sport continued to catch the attention of American sportsmen everywhere, and was well on its way to becoming a beloved national pastime.

By the late 80’s, the National Skeet Shooting Association formed the National Sporting Clays Association or NSCA to provide rules, regulations, and best practices for the sport, and to promote Sporting Clays across the country and world. You can find more info about the sport HERE at the NSCA website. Today sporting clays is one of the fastest growing sports in America, annually encouraging more than three million people of all ages to participate in this excellent hobby both competitively and recreationally. Read more at the Long Blog!

Bust Clays like a Boss and then join us in the bar to celebrate.

Longmeadow Clays Club is the only clay shooting course in Colorado with a full bar!

*(Consumption of alcohol is only permitted AFTER your shoot is complete) 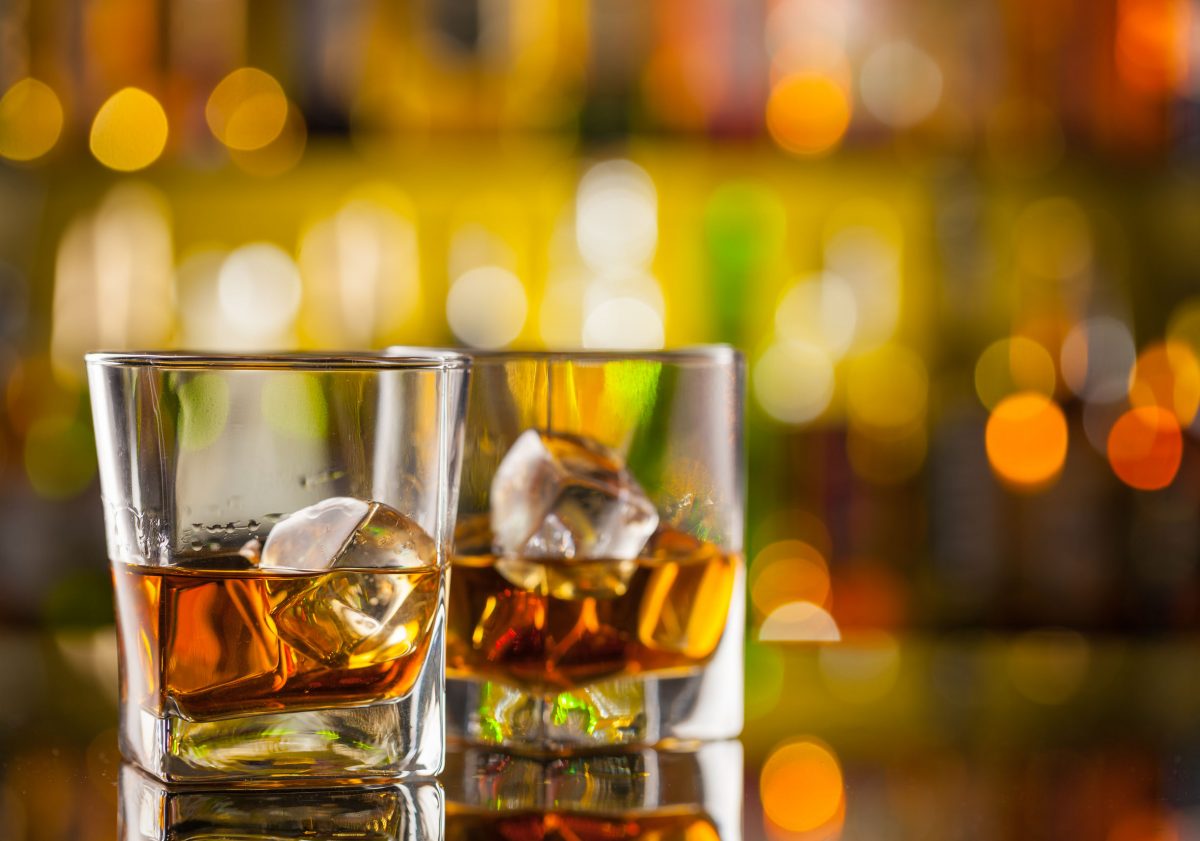 Located on the high plains just an hour northeast of Denver!

Send Us An Email

Feel free to inquire about your next event online!

“Awesome! Had a blast! Great targets and so well run. I will definitely shoot the 2nd Annual MEC Rocky Mountain Classic!”

Longmeadow Game Resort, Clays Club, And Event Center
This website uses cookies and third party services. By continuing you are agreeing to our use of cookies. Learn More Ok